Tuesday 27th September, a study visit by bike took take place on the greenway (RAVEL), from Liège to Aachen on lines 38/39 (Herve – Aubel section), awarded with the first European prize in the 10th EGA, category Excellence.

The objective was to share with the partners and stakeholders of the OurWay project Good Practices on the ground in the realisation of greenways, services, and facilities linked to non-motorised, cycling and walking infrastructure so that they can replicate them in a form adapted to their territories.

Thirty-five representatives from eight countries (Spain, Belgium, Ireland, Poland, Hungary, Bulgaria, France, and Italy) participated in the visit, and were welcomed by the Director of the Pays D’Herve Tourist Office,  Anne Zinnen, and her friendly staff. The director explained the role of the Pays d’Herve tourist office, the cooperation of municipalities to promote tourism in the region and to extend the offer of tourism services in the area, the importance of the RAvel in the area, and the projects underway and planned to further improve the services and facilities linked to the greenway.

Herve’s own tourist office is located in a former railway station, which is also a canteen bar and sells local products, including the renowned Herve cheese, with a designation of origin. It also offers a bike rental service, and has a bike repair and e-bike charging station, much appreciated by greenway users, making Herve a must-see! 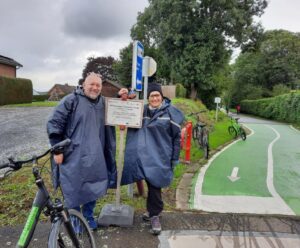 While the OurWay partners held the final meeting of the project, the stakeholders visited a cheese factory in Herve, the region’s most famous product.

Captions: The OurWay partners after the final project meeting, and stakehoders during the visit to the family cheese factory

After the ride, the participants move to the award-winning Racour station, which has been recognised with the European Greenways Award – European Year of Railways 2021.

Racour Station is a beautiful former railway station that has been converted into tourist accommodation by private initiative. In addition, old train carriages have been transformed to welcome guests. Participants were able to hear first-hand from the owners, Jo Uytterhoeven and Hilde Pottel, about the transformation and the challenges they have overcome to realise their dream. It is a particularly attractive accommodation for cyclists, as it is located at the foot of RAVEL, and also has bicycles available for its guests.

The visit is part of the final conference of the OurWay, Interreg Europe project ‘Greenways, a must to sustainable tourism’ which took place the following day in Brussels at the Committee of the Regions, and has been organised by the EGWA in close collaboration with members of the Association. The Pays Herve Tourism Office, the Chemins du Rail Association, and the Walloon region, with the support of the Region of Murcia, lead partner of the Interreg Europe project.

How has this greenway been financed?

Connexion sections of the greenway -L-38, have been co-financed by Wallonia, the European Regional Development Fund and the Municipalities of Plombières and Aubel, in the context of the EU project “XBMob – Cycling connects”; Interreg V-A Euregio Meuse-Rhine. The aim of the project was to create a unique cross-border cycle network in the heart of the Meuse-Rhine Euregio, between the cities of Liège, Aachen and Maastricht.

5 years of work and €8,400,000 of investment on the RAVeL Lines 38 and 39, to implement the missing sections to fully connect a 55 km greenway, completely safe, between the cities of Liège and Aachen.

About greenways in Wallon region

The RAVeL (“Autonomous Network of slow paths”) is a component of the road network managed by the Public Service of Wallonia – Mobilité Infrastructures (SPW-MI). RAVeL currently consists of more than 1,450 km of lanes, half of which are laid out on disused railway lines, and half on towpaths.

The RAVeL’s concept was launched in 1995. In 1997, Wallonia signed a framework contract with the SNCB (“Belgian railways National Society”) which allows SNCB to conclude a 99 years emphyteutic lease for each lines. SPW can then convert disused lines into greenways and  include them on the RAVeL. SPW takes over the cost of the works : road surface, engineering structures like bridges or tunnels, securing intersections, directional sign, police signs and the extraordinary maintenance costs.

Via a “maintenance convention” signed with SPW, local authorities are responsible for the  ordinary maintenance (cleaning the greenway, cutting trees and bushes, to remove rubbish,…).

The RAVeL budget for 2020-2024 increases investment in the renovation of old railway lines (20 million) and towpaths (5 million) to 25 million per year.

Many thanks to all those who made this visit possible! 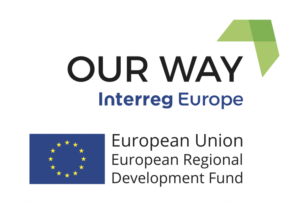