Six greenways from Latvia, Czechia, Austria and Spain were awarded as reference of best practices in Europe. The Award ceremony was held in Dikli, Vidzeme region (Latvia), and had the participation of the Minister of Transport and the Minister of Justice, and other authorities.

The European Greenways Award was created in 2003 and has been held every two years since, to recognize greenway projects that stand out for their excellence and demonstration of best practice.

In this 2019 edition the international jury met in Brussels on 10 July 2019, has awarded projects in two categories: “Excellence”, “Exemplary Initiatives” and one Special award (*), to recognize an Innovative action or product to improve the info and experience for tourists.

For the first extensive greenways network in Northern Latvia and Southern Estonia. In a very short time (less than 3 years), a network about 300 km long has been created, using the former railway lines to enhance the value of the history and heritage of the railway. Great results based on excellent cross border cooperation and a comprehensive, meaningful public-private partnership, including some 90 non-profit agreements with private landowners, as well as the railway company and forest agency. Green Railways has also established the bases for further development of greenways in the Baltic area.

For the high-quality infrastructure of the rail-trail greenway that connects towns and enables all kinds of users, including wheelchair users, to safely enjoy the environment along the route of the beautiful Sázava River. Exemplary in the Czech context, the high number of users shows the popularity of this greenway.

For the high quality infrastructure of this 55-km greenway which uses a railway line shut down in 2010. The Ybbstalradweg connects seven towns and places of natural interest, promoting the safe, day-to-day mobility of citizens and enabling locals and tourists to enjoy spectacular scenery and nature in this mountain area. Local community and citizen involvement, the vision of a tourism product prior to the construction of the greenway, and high-level public-private cooperation are the basis for the success of this greenway.

For a series of interesting initiatives related to the practice of sports and healthy habits involving use of the greenway, as well as for the involvement of local businesses (shops, restaurants and local producers) and other initiatives to promote and to better inform about the greenway. All the activities were set up and implemented through collaboration between public and private partners with the support of the education community, the primary aim being to encourage use and raise public awareness of the greenway and its economic environment.

For the creation of a mobile app for Spanish Greenways and Protected Natural Spaces that enables users to discover the rich biodiversity of Spain’s natural spaces, “Red Natura 2000”, biosphere reserves and the Geoparks Network. The application provides comprehensive information for each itinerary, including detailed maps and geopositioning, and is rated very positively by users.

More than 90% of Spain’s greenways are included since less than 5 km of these pass through protected areas.

The 9th European Greenways Award 2019 has been organized by the EGWA in cooperation with the Vidzeme Tourism Association and the support of the Investment and Development Agency of Latvia. The objective is to promote examples of best practices and to support their replication for other greenways all over Europe.

Greenways are “Communication routes reserved exclusively for non-motorised journeys. These routes should meet satisfactory standards of width, gradient, and surface condition to ensure that they are both user-friendly and low-risk for users of all abilities. In this respect, canal towpaths and disused railway lines are a highly suitable resource for the development of greenways. Greenways are known with different names depending on the country: Voies Vertes, Vias Verdes, RAVEL, Ecopistas, Radwege auf alten Bahntrassen, railtrails.

EGWA has been delighted to receive candidacies from Austria, Spain, Czechia, and Russia and wishes to thank all the candidates for the quality of their work and the effort done to provide very helpful information to the jury.

The jury makes furthermore special mention of the two nominations below and encourages the nominees to continue with their outstanding work. 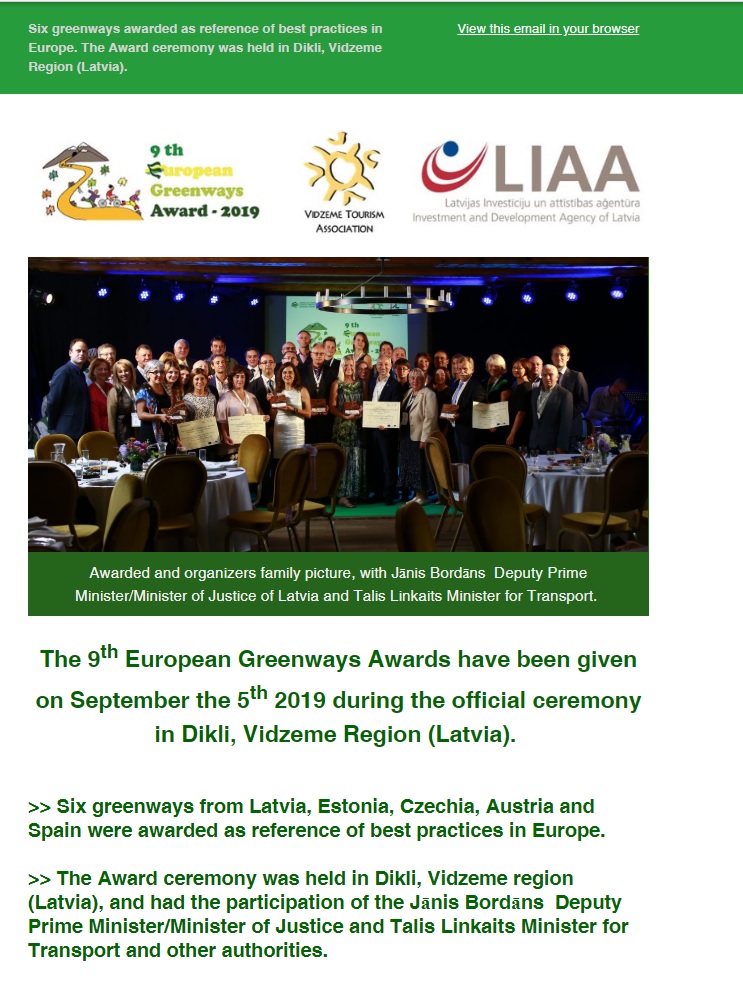 (*) The special award is organized as part of the Greenways Heritage project cofunded by COSME program of the European Union.

Disclaimer: The content of this event represents the views of the author only and is his/her sole responsibility; it cannot be considered to reflect the views of the Executive Agency for Small and Medium-sized Enterprises or any other body of the European Union. The European Commission and the Agency do not accept any responsibility for use that may be made of the information it contains.