The latest GIS (geographical information system) technology was employed to

produce a Tourism GIS web app that can be used on any device, with details of 15 combined greenway-heritage site itineraries in 10 countries. The app provides attractive and comprehensive information on greenways and UNESCO heritage situated in the proximity, in addition to services and other attractions available.

Both apps are extremely useful for tourists, tourism product developers and greenways promoters.

⇒ Augmented routes: the 360° experience on the Greenways cycle routes Mechelen-Boom and Mechelen-Diest

A specific action of heritage re-interpretation was carried out for a UNESCO site, the Groot Begijnhof (Flemish Béguinage) in the city of Mechelen, Antwerp province, and also in Flemish Brabant using augmented reality – 360º virtual reality – to improve the visitor experience and promote UNESCO heritage and greenways nearby.
The very attractive images obtained can be viewed via a specific web app and the tourism GIS, as they are georeferenced in the itineraries included in the Tourism GIS and Story Map apps.

The team’s tour operator, the TUVI company, has created 15 Greenways Heritage tourist packages across 9 countries, combining greenways with UNESCO heritage, and these are now on sale. TUVI has also established nearly 180 collaboration agreements with service provider companies in relation to the 15 itineraries accessible via the GIS Tour and Story Map apps.

The project partners have created 15 independent travel proposals (greenways + UNESCO) relative to 10 countries. The proposals vary in duration from one to five days and include highly practical recommendations and complementary information for visiting these attractive destinations.

Tour agents and managers located near greenways and UNESCO heritage sites, particularly those who have been involved in some way with the project, are now more aware and better informed of the opportunities joint promotion can provide, and of how useful the new technologies can be in spreading the word about their resources.
The principles and methodology applied to generate greenways + UNESCO-themed products could be promoted to generate new thematic itineraries linked to cultural heritage as well as to other themes.

⇒ Surveys: Unesco + Greenways for stakeholders and for tourist

The lack of information about the current condition of UESCO + Greenways itineraries has been a major obstacle to progress, which is why the project included two study blocks based on specific questionnaires. The first of these was directed at UNESCO and greenway managers on itineraries that had both these resources, as well as at local businesses situated in the proximity. The second was directed at users of greenways and UNESCO heritage sites.

The positive impact can be extrapolated to all European greenways with nearby UNESCO sites. Both resources are now more aware of the potential for joint promotion, thanks to global promotion and the increase in available information.

The attraction of new tourists will become a reality over time as promotional actions continue to be carried out and the service offer continues to increase, along with awareness in regions and countries currently unfamiliar with the greenways concept.

The data obtained from the two surveys was used to generate a forecast model which confirmed the significant potential economic impact of this joint promotion venture. Effective join promotion of the Ciclovia del Burana and the UNESCO site of Ferrara (Italy) as popular tourist destinations would generate a new economic flow into the territory of around 1.1 million euros per year.

On the basis of the responses obtained in the surveys, we can conclude that the joint promotion of greenways and UNESCO heritage sites could greatly increase numbers of visitors and revenue, along itineraries that combine these two valuable resources.

The results of the surveys will permit us to take better advantage of the combination of these two resources (greenways + UNESCO Heritage) and so move forward in the planning, management and promotion of these itineraries as common tourist destinations. Specifically, the actual case scenario of the economic impact of joint promotion analysed will inspire the joint promotion of other European greenways.

⇒ Best practices in the application of new technologies

We produced a guide to best practices in the application of new technologies to inform visitors and improve their experience, including high-profile examples of UNESCO cultural sites and greenways.

The specific examples of new technologies applications in the Best Practices Guide will provide guidance and recommendations on the integration and use of communication technologies to enhance the visitor experience on greenways linked to UNESCO Cultural Heritage sites. 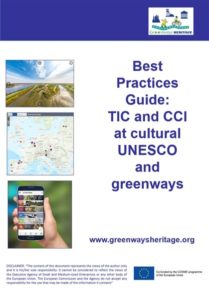 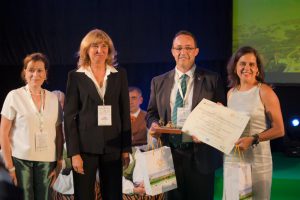 A special award was created, as part of the 9th European Greenways Award,  to encourage innovation and the use of cultural and creative industry tools to improve the information available to greenway users and hence the user experience (Dikli, Latvia, September 2019).

The award has had a far-reaching impact internationally (press, media, web) and its excellent results continue to bring benefits to the winners. It has also served to publicize the project and the use of these technologies through practical, real-life examples

The Guimarães Declaration was launched at a workshop in this world heritage city. The Declaration is based on 10 highly practical recommendations for action to improve joint promotion and link UNESCO heritage sites with greenways as common destinations which share sustainable tourism development criteria. Approximately 30 signatures from 10 countries have supported the Declaration so far. The seal of the European Year of Cultural Heritage was also obtained for both the event and the Declaration.

Would you like to contribute to the joint promotion of greenways in your territory? Read and sign the Guimaráes Declaration, and initiate whatever actions you can. You could higly increase your visitor numbers and economic impact! with UNESCO managers in the joint promotion!!

Subscribe the Declaration! for the promotion of UNESCO sites and greenways as common destinations in Europe!   HERE   Available in English, French and Spanish.

Adherence to this declaration is open to:

The private sector, in particular SMEs located in the vicinity of greenways and UNESCO heritage sites, or those which operate in these territories

The general objective of the Greenways Heritage project is the “development and diversification of the European tourism offer by generating new tourism products related to heritage greenways and UNESCO cultural sites located nearby”.

In order to develop and promote this innovative tourism product, the project has provided the development of a “Greenways Heritage Brand”; to this end, a protocol containing guidelines, criteria and requirements check-list has been defined; the protocol will allow to identify the trails to which the “Greenways Heritage” brand will be granted, on the basis of a qualitative and quantitative evaluation. These trails will be promoted and recognized by the use of the specific “Greenways Heritage” logo, produced by the European Greenways Association (EGWA).

Numerous meetings/workshops/conferences organised or to which the partners participated to raise awareness about the interest of the Joint promotion Greenways + UNESCO. In all these gatherings the need for partnerships and collaboration between public and private sector, public-public and private-private, and the importance of innovation and the use of new technologies was emphasized.

As the previous projects, Greenways HERITAGE will enable further progress in the development and greater recognition of the European greenways in Europe, reinforced in this case with the combination of UNESCO sites.