Last May 7th we had a monographic online meeting on Action Plans, organized as an alternative to the one planned in Montpellier (France), to be held jointly with the steering committee and a seminar on Promotion, that the pandemic forced us to cancel  .

All the partners presented a first draft of the action plan, with different levels of detail, which allowed us to share what concrete actions the partners propose for their territories, in a first approach.

Main questions to be reinforced in the plans were explained: the need to clearly explain the policy instrument to be influenced by the AP and how it will be done; the connection between the good practice/s learnt thanks to the project and the actions to undertake in the AP; likewise it is necessary to clearly define the objectives, actions planned and the results expected; they have to be concrete, achievable and coherent to influence the policy instrument, must be based on the learning process and be realistic with the budget and the resources dedicated to its implementation.

The starting situation of the partners is no similar, nor their competences and financial resources. The draft plans are also in different steps, some are well advanced and others have barely identified the actions to be developed.

Some partners are proposing very ambitious APs that will imply a great transformation of their territories with the incorporation of greenways and new cycling routes in the coming years; they will be planned connecting main attractions to take advantage of the great potential for nature and cultural tourism that their territory offers and consequently will require higher budgets. 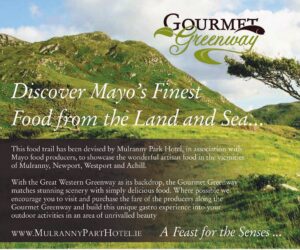 In other cases they are aimed at improvements in promotion, incorporating new attractions and supporting services around greenways or walking paths, even though a specific call addressed to support the SMEs located nearby greenways, to enhance the services and job creation.

Other actions addressed to improve governance are also proposed by most of the partners, inspired by the best practices learn in the project and underpinned by the participatory methodology of Interreg through the integration of stakeholders.

Furthermore the valorisation of traditional or historical itineraries already existing but that are hardly structured or barely known, that have the potential for a greater development, with the necessary actions of structuring and promotion; the proposed actions will help them to become attractive destinations for national or international visitors, as well as for the local population. 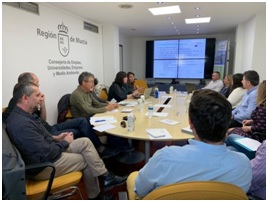 The meetings with stakeholders have also been affected and therefore some of the partners have yet to meet to confirm the actions initially included in these plans, and in other cases to precise the content of the specific actions to undertake and to establish the commitments of the stakeholders, necessary for the implementation of the proposed actions.

How could some of the actions be implemented? This important question was raised by some of the partners since we are at the end of the financial year and their budgets have practically finished.

Funding is one of the axes of the OURWAY  and it is very important to take into account the current policy instruments in which the action plans have to be framed, but it is also necessary to have a clear information of the funding conditions in the near future, especially in those cases where the Action Plans envisage the improvement of current plans through technical documents, for example, plans for extending cycling network and greenways in a region. These plans would be technically prepared in phase 2 of the implementation of the OurWay Action Plans, but their execution, the concrete construction of the necessary infrastructure, signalling, etc… would be done at later stage, so they need to know the funding priorities for the next financial period.

It is therefore very important to keep in mind both scenarios the current one and also the financing possibilities for the implementation of these plans, in the next financial period +2021.

The importance of RIS3 has also been taken into account; it is the policy instrument that one of the partners had planned to improve from the beginning. Most probably other partners will also improve it in view of its importance and thanks to the learning process of OurWay; this issue has also been analysed in the documentation prepared to facilitate the partners the realization of the plans and their implementation.

>> Monitoring is essential to verify that the objectives are being met. To this end, it has been agreed by project partners to include Monitoring as an additional point of the Action Plans, to be carried out every 3 months in phase 2; performance indicators will also be clearly defined so that this monitoring can be carried out in a objective and clearly way.

An essential part of the Interreg Europe methodology focuses on the exchange of best practices through study visits. The schedule of visits was already fixed and unfortunately the programme had to be suspended. The study visits were concentrated in this semester and it has only been possible to carry out one of them, to Bulgaria; the partners from Poland participated as “importers” and the visit resulted very positive.

Another main topic of the meeting has been how to adapt the study visits to the current circumstances, to give continuity to the project and to ensure that the action plans are carried out as planned, in the best possible way. 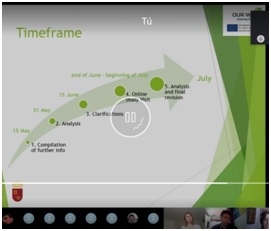 To this end, promoted by the Lead Partner, a methodology has been developed to organize the visits online. The work involves preparing additional documentation to those already presented, asking specific questions addressed to the “owners” of the BP`s to know in detail those aspects of the BP needed to prepare the AP. Based on this information, the specific agenda of the online meetings is prepared by the “host”, and the online meeting will count with the “owners” of the BP and the partners and stakeholders of the territories that wish to “import” the BP’s or components of them into their Action Plans. The online visits will be followed by a Peer review as part of the final review and to ensure the quality of the results.

Risk analysis. A note on risk analysis prepared ad hoc for the project was circulated in advance of the meeting so that partners can take it into account when preparing the Action Plans from the initial stages. The objective is to help anticipate potential risks, using a simple and practical Risk Assessment Matrix to evaluate the potential risks that the Action Plan could face during the second phase of the project.

This situation is very difficult and new; like for all the people the pandemic has significantly altered the development of the plan and it has been necessary to adapt the organization using online tools, to continue advancing in the best possible way. This has forced us to move forward with digitalization in real practice, which is a positive aspect; and to feel proximity of the partners even on line! It was a great joy to be able to meet each other, in these days of strict confinement, even though this online platforms.

We have learned through Interreg’s webinars about the organization of online events. The next challenge is the organization on line of the seminar planned in Montpellier about “Promotion”, in which we are already working, to be able to carry out in June. 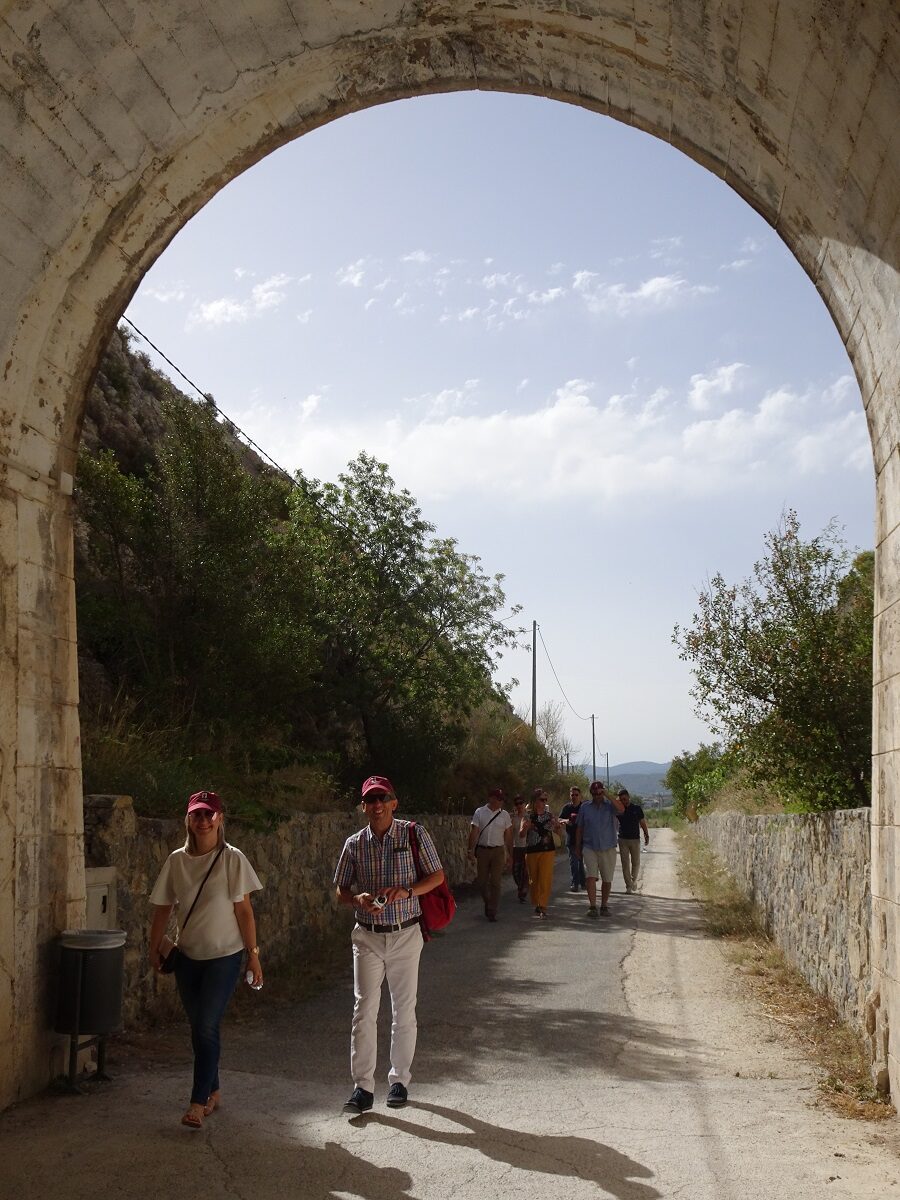 Perhaps the most difficult thing is missing the study visits. We hope that at least some of them can be finally done, as they really have a great added value. Study visits allow us to see the reality of the best practices in their context, from the inside; they greatly facilitate the understanding of the experiences and help to overcome many of the frequent language barriers; many more questions and exchanges arises and opportunities to discover unexpected and interesting things, which only arise on the ground;  they provide many good ideas that can be converted into concrete actions of the action plan, that can be replicated in other contexts.

No doubt, the current vision of the partners, who did not know the greenways before the beginning of the project and their interest in developing them in their territories, would not be the same without the visits to the greenways, without having experienced them by foot (Murcia) by bike (Ireland) or pedalling in the bikerail (Poland).

The visits organized in combination with the seminars have allowed the partners to discover the real interest of the greenways as tools for the protection and promotion of cultural and natural heritage, enjoying great outdoors.

As EGWA, it is a great satisfaction that all the partners who were not familiar with the concept of the greenway have discovered its advantages and appeal. They are incorporating the concept and will undertake concrete actions for the implementation of greenways or the development and promotion of non-motorised routes in their territories, to the extent of their possibilities, realities and competences.

>> The action plans will serve to improve the territories represented, with concrete actions to make their cultural and natural resources more visible, attractive and accessible to more domestic and internationals tourists; to establish new or reinforced systems of governance with a partnership that will favour the development and promotion of greenways and non-motorized routes and paths, with the support of stakeholders; all these taking into account the current and future financial framework to make the implementation of their plans possible. 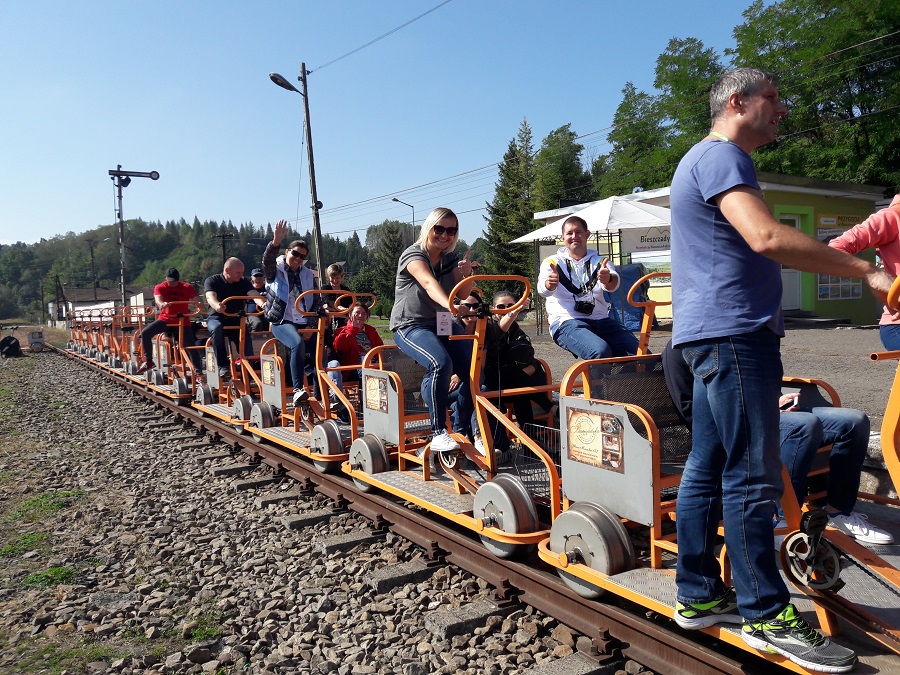 In these plans there will be a greater or lesser extent of the presence of greenways. They will definitely benefit the people and SME’S of the territories represented in the surroundings of these non-motorised itineraries and also the Europeans as a whole, who will have more offer of cultural and natural richness accessible through the greenways and other cycle-pedestrian itineraries, with numerous attractions to discover along the routes.

>> There’s still a lot of work to be done, but we’re on the good way!  We are confident that the situation will improve for everyone, and as far as OurWay is concerned, we really wish to be able to make study visits -on site that would be for sure a benefit for the design of the Action Plans and their future implementation.