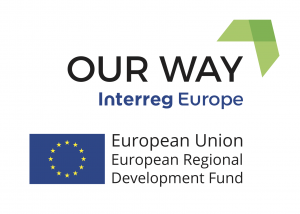 This was a great opportunity to learn all about the Irish Greenways strategy and, in particular, the successful Great Western Greenway in County Mayo, at the Northern and Western Regional Assembly (NWRA), the hosting project partner.

A few months ago, the Irish government approved The Greenways Strategy – Strategy for the Future Development of National and Regional Greenways, promoted by the Department of Transport, Tourism and Sport. The strategy was devised through cross-departmental collaboration and with contributions from all kinds of interested parties, in a process which took more than one year to complete.  Right up until the final approval stage, the design was open to the participation of all interested parties and enjoyed the substantial involvement of various government departments, authorities and stakeholders at local, regional and national level. Ireland’s greenways are based on the concept outlined in the EGWA’s Lille Declaration.

This first seminar provided us with a great opportunity to learn about the whole process in depth, at first hand from the key players involved in the process. Specific examples of the development of greenways and other itineraries were also presented by representatives of various government departments at local, regional and national level.

Particular attention was paid to the specifics of the Great Western Greenway, located in County Mayo, at the Northern and Western Regional Assembly (NWRA), a partner region of OurWay. The major impact on the local economy was one of the main motivations behind the launch of this national strategy for the development of greenways in Ireland. We also had the chance to learn about the experiences of two businesses, the Mulranny Park Hotel  and Clew Bay Bike Hire, both of which rely on the Great Western Trail as essential infrastructure in attracting customers. Both are clear examples of successful businesses associated with the greenway.

Finally, we were able to take part in a technical cycle tour of part of the Great Western Greenway, and learn about the interest these infrastructure hold for all kinds of users from a practical perspective.

The seminar was very positive, with real-life success stories. No doubt the success of the Irish experience, exemplified by the award-winning Great Western Greenway in County Mayo, will inspire new greenways initiatives in Europe for the protection and promotion of the cultural and natural heritage, thanks to the OurWay project within the framework of the Interreg Europe