EGWA will co-ordinate this new EU project funded under the COSME programme for the Competitiveness of Enterprises and Small and Medium-sized Enterprises (SMEs).

The general objective of the project is the development and diversification of the European tourism offer by generating new tourism products related to heritage greenways and UNESCO cultural heritage sites located nearby. This is to be achieved by widely disseminating this appealing offer in order to attract more tourists and to generate an economic impact on territories which have both UNESCO sites and greenways, and in particular on the SMEs located in their vicinity. To promote the use of new technologies applied to greenways and UNESCO sites to better inform tourists and so enhance their experience.

To achieve this objective various types of concrete actions will be implemented:

As the previous projects, Greenways HERITAGE will enable further progress in the development and greater recognition of the European greenways in Europe, reinforced in this case with the combination of UNESCO sites. 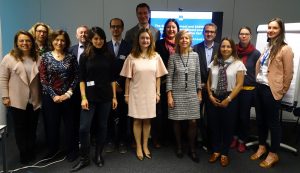 Family photo of the representatives from DG GROWTH, EASME, and from approved projects at the kick-off meeting taken on EASME premises. Brussels, 17 May 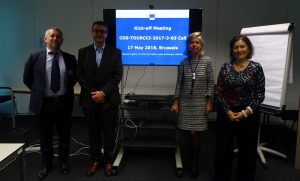 In addition to the internal meeting of partners and a planned technical visit to the Atapuerca archaeological site and the Sierra de la Demanda Greenway, there will be a presentation of the project for press, authorities and stakeholders. The presentation will be held in the Museum of Human Evolution in Burgos. 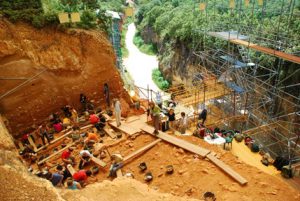 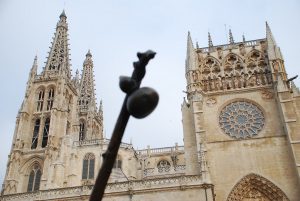 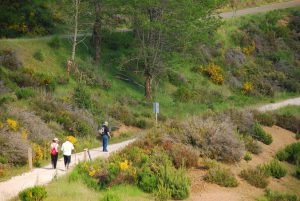 Why in Burgos? And why in the Museum of Human Evolution?

Burgos has three World Cultural sites: the Our Lady of Burgos Cathedral in the centre of the city, the Atapuerca UNESCO World Heritage Site located 14 km from the city of Burgos, and the Routes of Santiago de Compostela: the Camino Francés and Routes of Northern Spain that pass through the city of Burgos.

Burgos also has 2 greenways, one starting from inside the city and one from nearby:

Because of the confluence of all these elements, together with the use of new technologies applied to tourism, the Museum of Human Evolution is the chosen venue for the international presentation of the project and the partners kick-off meeting, thanks to the kind support of the General Directorate of Tourism of Castile and Leon.

Disclaimer : The content of this news represents the views of the author only and is his/her sole responsibility; it cannot be considered to reflect the views of the Executive Agency for Small and Medium-sized Enterprises or any other body of the European Union. The European Commission and the Agency do not accept any responsibility for use that may be made of the information it contains.